Lessons from the Floods: Advance preparation pays off

The following story is from the Lake Champlain Committee series Lessons from the Floods. 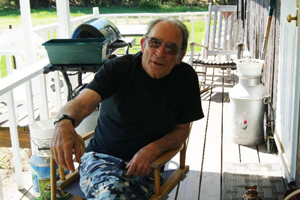 Pawlet sits in the southeastern corner of Rutland County surrounded by the Taconic Mountains. The Mettowee River rolls through town as do many smaller feeder streams. Given the topography, the rivers and the six inches of rain Irene brought to the area, it is surprising how little damage the town suffered. Much of the credit for the town’s resilience in the face of Irene belongs to Clarence Decker.

Decker has been an officer in the town for over 35 years. He has served as road commissioner and on the select board. Decker is also a prodigious grant writer. Over the years he has had a hand in securing funding for at least half a dozen projects that increased the region's flood resilience. Here are a few examples:

Grant writing is not easy. Decker notes FEMA grants require an estimated 200 to 300 hours to prepare. He receives assistance from the regional planning commission. He knows and is trusted by local engineers who assist in design work, or sign off on design work he has done. He relies upon the fire and rescue squads to help him document risks associated with losing certain road crossings during emergencies. And he keeps good records about culvert failings to build the case for their future replacement. “I just want to be able to say I bettered this town,” he notes.

FEMA Hazard Mitigation Grant applications are actually made to the state which reviews proposals and passes the top ones on to FEMA. Federal funds can cover up to 75 percent of total project costs. Only communities that have FEMA-approved mitigation plans and that participate in the National Flood Insurance Program are eligible for Hazard Mitigation Grants.

While Decker’s commitment is unique, money is available for those seeking to deal with repeat flooding problems. The hurdles of grant application mean that FEMA often has more money than applicants request. A successful application must show damage at a particular structure has occurred more than once and preferably at least three times, but that could date back to the 1927 flood. Applicants must also complete a “benefit cost analysis” which shows the benefit of improving a culvert or bridge will exceed the cost of the work. Repeat damage helps meet this need, as does the input of the fire and rescue squads.

The Town of Warren also took steps prior to Irene to mitigate future floods. Warren was devastated by flooding in 1998 when heavy rains fell on already saturated soils in late June, swelling the Mad River. Following the flooding the town, with FEMA assistance, purchased three homes along the Mad River. Two of them later became the town-owned Riverside Park. Over the years gifts and additional purchases have helped the park expand. A 2008 plan for the park identified a primary goal of allowing the river channel to return to a balanced state. Over time, the river would top its banks and erode and deposit sediments along its channel and the park, which it did in 2011. According to Caitrin Maloney, formerly of Friends of the Mad River, Riverside Park area offers one of the first opportunities downstream from Warren Village, for “the river to blow off some steam” during high flow.

Advanced preparation can help individuals as well as towns. Along North Road in Middletown Springs the Irene-swollen North Brook wiped out multiple stream crossings. Of the four stream crossings along the road, only one bridge survived; the one where homeowners sought input from a river scientist prior to construction. Heeding the consultant assured the bridge would be wide enough to outlast high water events. Stream crossings that failed were substantially smaller.

Road project designers would be well served to follow the examples of Clarence Decker, the town of Warren and the homeowners along North Road and consider future flooding during the planning stage. Many communities are already doing so. As one example, Bristol plans to replace two small undersized bridges on the New Haven River with a single 360-foot structure that will span the full flood-prone area. The new bridge will increase the capacity of the river to pass water and lessen the likelihood of future flood-related damage both to the bridge itself and downstream. Climatologists predict more intense storms and more flooding for our region. Adjusting our infrastructure to face this new reality will require foresight and preparation, but it is imperative that we do so.