Links to sections below:

Video: Why Rivers Move and Erode

Video show how stream channels adjust to the power of flowing water. When the channels are armored and straightened they get more powerful and erosive. This 8 minute video was produced by Riverbank Media for the Connecticut River Conservancy (CRC). 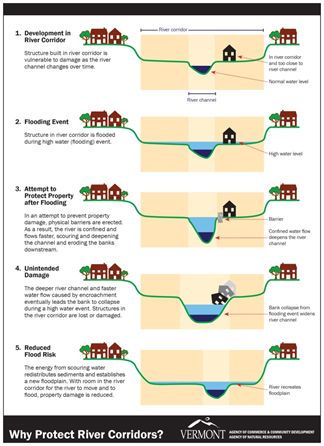 The Problem of Fluvial Erosion

Most of the flooding damage we experience in Vermont is from the power of moving water and the sudden destruction of under-sized culverts and erosion of stream banks supporting roads and buildings. By allowing a river the room it needs to slow the flow, over time we can allow it to function as a responsive system and avoid repeated losses to public infrastructure and investments.

Erosion (and deposition) along a stream or river is natural. Sometimes, in the quest to stop this process in one place we can make it worse in others. Rivers, streams, and their channels are changing constantly in response to the water, energy, sediment and debris that pass along them. Every few years the stream fills to bankfull and the shape of the channel responds to this force by cutting deeper into some streambanks and also by depositing sediments in the quiet inside bends. This process is visible as an “S” shaped form that slows changes position.

If the stream cannot spill out of its banks, the power of the trapped water increases and the channel either digs down or cuts out further to the sides. Where the roads and buildings are nearby these adjustments to the channel’s shape can become dramatic and costly.

A river is in geomorphic equilibrium when it is in balance with its water, energy, sediment, and debris. In this condition a river is neither building up sediment in the channel nor losing sediment from its bed. Importantly, a river in equilibrium has not become overly deep and can continue to overflow onto its floodplains. The water that spills onto the floodplain slows down, and the velocity of the water still in the channel does not become excessively powerful.

Below are photos with links to video animations of LandSAT imagery illustrating fluvial geomorphic changes. 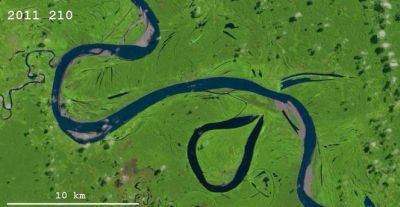 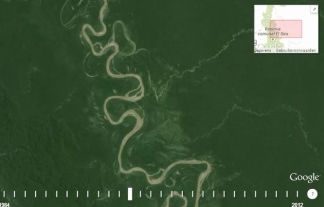 Wherever we are trying to protect roads and buildings we need to be sure that the river is able to function as well as possible upstream. We need functional streams and rivers with room to adjust (River Corridors) and intact floodplains to moderate the impact of high water events.

The Rivers and Roads Tier 1 Training has a clickable on-line introduction to the river processes that drive fluvial erosion or support channel equilibrium.  You can find more under River Science on the Resources page.

What is a River Corridor?  / What is a Floodplain? 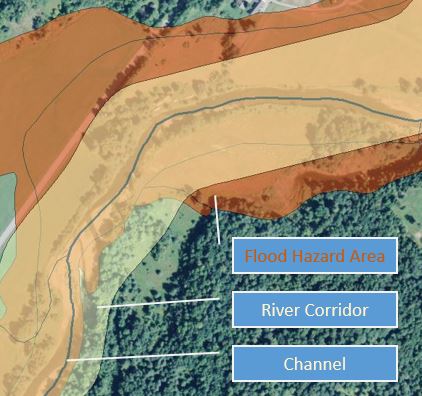 River Corridors and floodplains are different but related. The River Corridor is the area that provides the physical space that the river needs to express its energy and meander without causing it to dig down. A floodplain is the area where water flowing out over the river bank spreads out.

River Corridors and floodplains overlap a great deal. One on top of the other there might be 60 – 90% overlap. However, there are areas in the River Corridor that will be eventually shaped by the channel - but are currently high and dry -  and other areas in the floodplain that will be under water during a large flood even though the river channel may not need to access this area to maintain geomorphic equilibrium. Together these areas describe the dynamic area affected by channel changes and/or by the extent of flood water.

The National Flood Insurance Program (NFIP) is managed by the Federal Emergency Management Program (FEMA). The insurance program is focused on a particular sized flood. The NFIP focuses on a floodplain legally described as the Special Flood Hazard Area that has an annual chance of flooding of one percent or more. Sometimes larger floods (the 0.2% annual chance flood) are also identified by the NFIP. Within these mapped floodplain areas there are parts that get flooded much more often. Outside of the mapped areas the effect of larger floods is not shown.

The extent of the meander belt of the River Corridor is based on calculations such as watershed size and gradient (stream power) and channel width. The meander belt identifies the area needed by the watercourse to achieve and maintain equilibrium where stable bank conditions exist. The Special Flood Hazard Areas are identified by FEMA based on calculations such as stream peak flow history and frequency.

Why Do We Need to Protect and Restore River Corridors and Floodplains?

The landscape we depend on is formed in part by the water moving through it. We need features such as forests and permeable soils to delay the flow of water downhill. Streams and rivers need space to adjust to their loads and to come into equilibrium so they can flow onto their floodplains when needed, and moderate their erosive power. Peak flows of water need places to disperse and slow down, using the floodplains they have shaped over thousands of years. We need the river corridors and floodplains upstream to function to that the water does not become directed against culverts, bridges and historic settlements with excessive force.

River corridors minimally encompass the meandering of a river in a least erosive form. They are drawn with the expectation that new and existing structures outside the corridor may be protected from lateral channel migration using bank stabilization practices without creating new or additional hazards. Within a river corridor, existing infrastructure and buildings may be at a heightened risk from erosion and are more likely to require river management in order to protect them over time.

Encroachments within a river corridor require ongoing costly safeguards in the form of channel straightening, dredging, and armoring, which leads to the transference of flood energy to upstream and downstream locations, and higher risks to people, infrastructure, and improved property.

Protecting rivers and floodplains in dynamic equilibrium will help to store the sediments, soils, and nutrients that pollute downstream waters (e.g., Lake Champlain), and retain the natural in-stream structure on which aquatic and riparian species depend for cover, feeding and reproductive habitat.

Vegetated buffers to maintain stream equilibrium are part of the extent of Vermont river corridors due to the critical role woody vegetation plays in stream boundary resistance. Tree roots add to the cohesive strength of stream banks and wood entering and lodging within streambeds can slow floodwater and help control the slope of the stream bed.

Before we start trying to fix every culvert and building we need to be sure we are also not making the situation worse. To get ahead of the curve and become flood resilient we cannot afford to replace and maintain all the services that our forests, wetlands, river corridors and floodplains already provide.